Zones of alpine tundra can be distinctly observed on summits of Nuorunen (577 m), Mjantjutunturi (550 m) and Kivakka (499 m) situated in the territory of the National Park as well as on three other fells close to the Park’s border – Sieppituntury (537 m), Ukontuntury (501 m) and Lunas (495 m).The summits are denuded. Several hundreds of hectares of rock surface are covered with alpine tundra vegetation. Thin soil layer occurs only in shallow vales. Generally vegetation growth depends mostly on turf which is very sensitive to droughts. In the rare dry spells vegetation on steep slopes withers, but moisture always remains in multiple cracks and small fissures. Tundra vegetation has well adapted to severe environment. 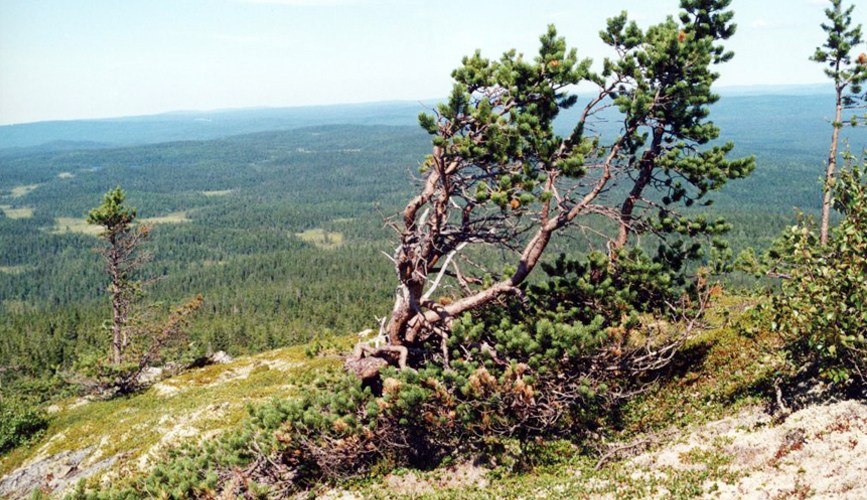 This alpine tundra is the southern-most tundra in Fennoscandia. It is characterized by original arctic vegetation with specific species composition of such vascular plants as: Loiseleuria procumbens, Phyllodoce caerulea, Juncus trifidus, Diphasiastrum alpinum, Arctous alpine, etc. The reindeer is not numerous in the Park, therefore the lichens in the woods here are in splendid condition. If you look at the western slope of Nuorunen in the evening you will see a silvery shine from the reindeer lichen that covers the mountain. Of the rare lichens one may find there Tholurna dissimilis. The mosses Anthliajuratzkana and Scapania huberborea that can be found there also belong to tundra species.

Succession of the forest-forming species of the forest zone by endemic sub-arctic species is taking place on the mountain slopes. Common pine (Pinus sylvestris) is substituted by Lapland pine (Pinus lapponica), birch Betula pubescens by birch Betula tortuosa, grey alder (Alnus incana) by Kola alder (Alnus kolaensis). Flag-like trees with branches only on the western side can be often seen on the eastern slopes of hills. The slopes facing north-east are opened to the cold Arctic winds, the tundra zone there is 60-70 meters lower than on the south-western sides. Mountain forest is very peculiar. The spruce trees are wide and fluffy but they are spaced far from each other like in a park. Thickness of trunk at ground level could reach 30 cm with a height not more than 6-8 meters. Many such trees grow on the western slope of Nuorunen fell. 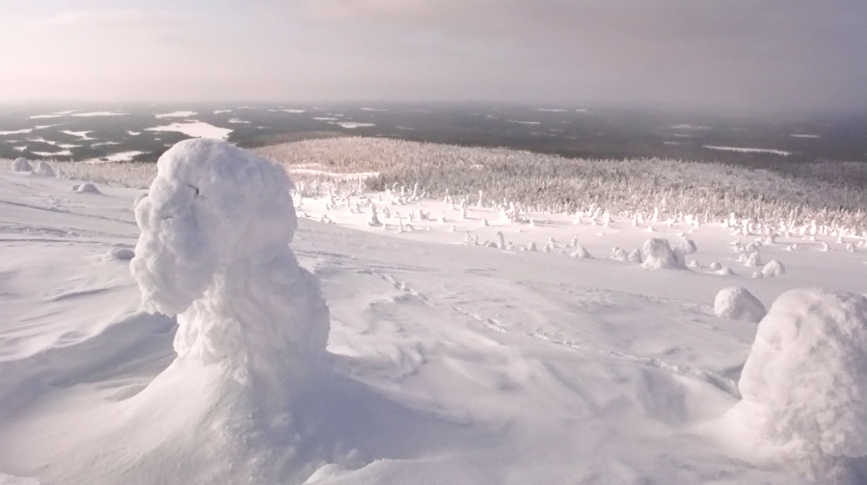 Many tree plants in the tundra zone acquire unusual forms: shrub-like aspen, creeping spruce and pine, lots of small trees with withered tops, etc. In this way they hide under the snow in winter from frost and wind. Such trees grow very slowly. A little dry fir tree with trunk diameter 2 cm turned out to be of fairly mature age of 56. Its average increment was only one millimeter in three years.