The river-and-lake system Oulankajoki – lake Paanajarvi – Olanga river is the main water artery of the region. Its watershed area is about six thousand square kilometers. On the Finnish side only a little more than 20 per cent of it lies in the protected area whereas on the Russian side almost hundred per cent. The Oulankajoki length in Oulanka National Park is about 80 km, but with all its meandering it is much longer. It has two tributaries in its upper reaches: Savinajoki and Maaninkajoki rivers. Closer to the state border with Russia Kitkajoki river joins it and on the Russian side just before lake Paanajarvi – Kuusinkijoki river.

The low alpine topography determines the mountainous longitudinal profile of rivers with multiple rapids and waterfalls. Beautiful cascade waterfalls are on rivers Mjantjujoki and Selkjajoki. There were water mills on both of them in the earlier times. Millstones and foundations can be still seen on their sites. 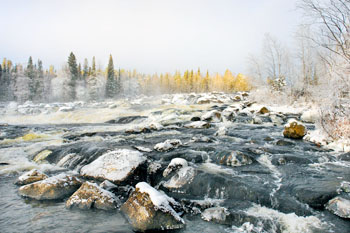 Kivakkakoski rapids on Olanga river is near its present estuary. Today it is the highest unregulated waterfall in Karelia with a height of 12 meters. Its mean water discharge is 63 cubic meters per second. Its roar can be heard from several kilometers. Altogether there are 13 rapids on the river from lake Paanajarvi to lake Pjaozero. They are interspersed with calm stretches of water. Olanga river flows into Kumskoje reservoir. After construction of the dam for Kumskaya hydro power plant in the 60s the water level in lake Pjaozero rose 9 meters and the lake merged with another lake Topozero to form a reservoir of almost 3,000 square kilometers. The estuary of Olanga was flooded together with fields and buildings of evacuated village Olangasuu. The shoreline forest went under water. Even after 35 years some of the dead trees stand rising from the water. Earlier Olanga had one more tributary – Nuorusenjoki. Today it flows directly into lake Pjaozero in the flooded part of the river.

There are more than 120 lakes in Paanajarvi National Park. Forty of them have an area more than 100 hectares. The lakes occur mostly in groups in depressions between mountain ridges at elevations 200-300 meters above sea level. Iso-Sieppijarvi and Sovajarvi belong to water system of Sovajoki river, Selkjajarvi – to water system of Selkjajoki. Mutkajoki river flows from Iso- and Pieni-Nuupajarvi.

Most of the lakes lie in fissions in the bedrock. They are narrow and deep (30 m and more), elongated with steep rocky banks. Very often chains of lakes mark the line of the rift. Sovajarvi and Selkjjarvi lakes were formed in the natural depressions in the bedrock folds, they are not deep. Small shallow lakes and ponds occur in mires, on the slopes of hills and even on the summits of fells.

Paanajarvi — the biggest lake in the region – lies in a large bedrock rift. It is 23.5 km long, 1-1.5 km wide and up to 128 m deep. All the streams of Oulankajoki water system in Finland flow into the lake. Water in Oulankajoki and Kitkajoki by chemical composition is very similar to natural water, whereas in Kuusinkijoki water is significantly contaminated by agricultural and fish-breeding activities. Obviously this tributary is the cause of pollution of Paanajarvi water in the last few years as has been proven by diatomic analysis of bottom sediments.

Water in all smaller rivers, lakes and streams is extremely pure because they are fed by springs. You can come across springs everywhere along the slopes and at the feet of steep cliffs. Small mires with cold-resistant plants very often surround a spring.