The route is suitable for people of different age and physical condition with exception of persons for whom excessive physical strain is not recommended for medical reasons.

The trail is marked with signs, kilometer posts and ribbons on trees. There are information boards in three languages, campfire site with a shed with fire wood. 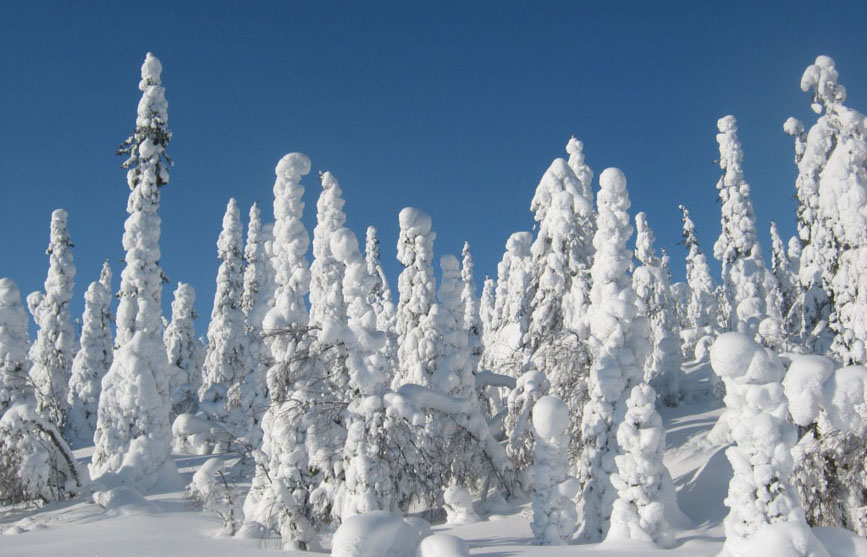 The trail starts from the road 50 meters from the southern border of the National Park and the rangers’ station on Nuris river.

The trail runs in the western direction following an old winter road around Kurovara fell (249 m). Elk, ermine and wolverine footprints are everywhere along the trail. Occasionally one may sight capercaillies which are not scared by the roar of the snowmobiles.

Further on the trail crosses Kuralampi lake and a mire in the north-western direction and comes to the northern end of lake Iso-Siikjarvi.

The trail climbs up the highest mountain in Karelia (576.9 m) by its northern slope. During the ascent one can observe succession of three vertical zones: the taiga zone, the forest-tundra and tundra zone. Huge snow-covered fir trees guard the trail. The air there is very pure which is proved by the presence of Usnea longissima — an indicator of ecological health. This lichen is extremely sensitive to the smallest negative environmental changes.

The famous seita stones on sacred sites of indigent Sami can be noticed along the way. They are rather big rocks standing on smaller boulders as on legs. Sami believed that souls of demised shaman lived in these stones and ruled over the living. These worshiping sites are valuable historical monuments.

Picturesque snow sculptures adorn the mountain slopes Strong winds reign over the denuded summit. The Sun, the wind and the frost harden the snow crust so that it holds snowmobiles.

A splendid view opens from the summit on the Tavajarvi lake, Kivakka and other fells. On a sunny day Ruka mountain can be seen on the territory of Finland.