The route is suitable for people of different age and physical condition. The exception is people for whom excessive physical strain is not recommended for medical reasons.

The trail is marked with signs, kilometer posts and ribbons on trees. There is a shelter, a firewood shed, a campfire site, information placards in three languages. 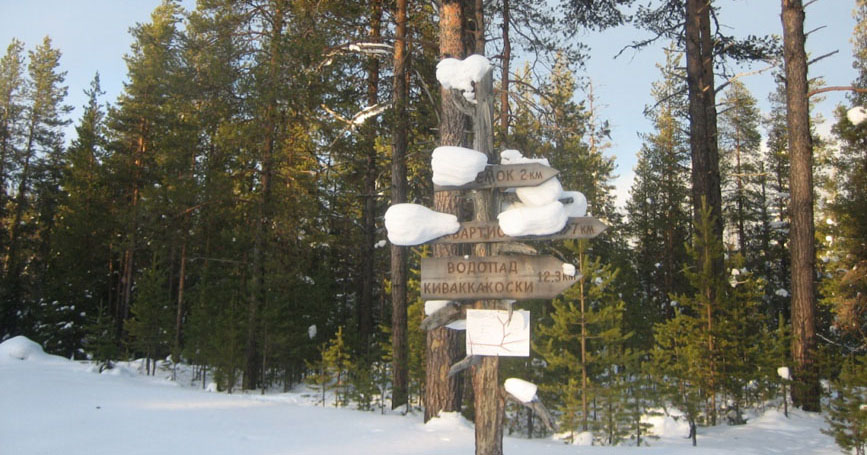 The trail starts from the former village Vartiolampi which before WWII was the closest to the state border. A wide open space is left of the former village. A local graveyard was located in the southern end of the meadow in a spruce grove. Locations of the former houses in the village are marked with information placards. An old Karelian log house was reconstructed in the village with an exhibition devoted to life and habits of local dwellers of the beginning of 20th century.

The trail runs to the south-east following the old road. Numerous footprints in the snow of birds and animals can be observed in the forest during the ride.

Noise from the cascading water can be heard from far away. The trail turns to the right from the road and descends to the rapids. The waterfall consists of four steps of 12 meter height. The striking feature of it in winter is its colour. Its upper part resembles a light-turquoise candy. Splashes and froth at the bottom freeze in fancy lace. On a cloudy day the colour of water varies from light-green to dark-gray. On a sunny day water shines all colours of a rainbow.