The route is suitable for people of different age and physical condition. The exception is people for whom excessive physical strain is not recommended for medical reasons.

The trail is well-maintained with information placards in three languages, wooden duckboards across waterlogged spots, benches for rest, a campfire site at the beginning of the trail, a shed with firewood, a toilet and a trash bin. 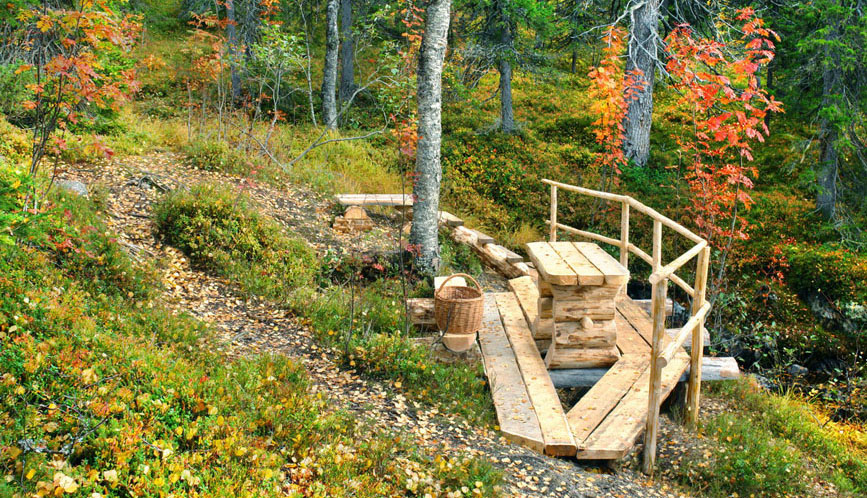 The trail begins at the motor road. It traverses the not so steep western slope of the fell. After the first 200 meters it crosses Palajoki rivulet which flows from Kivakkalampi lake, circles the Kivakka fell and enters lake Pjaozero. During the ascent one can witness the vertical succession of vegetation from taiga to thin birch forest and to alpine tundra on the summit.

Kivakka fell is known for the so-called ‘hanging mires’ and alpine ponds.

Many trees on the mountain have flag-like crowns with branches growing only on the eastern side thanks to predominant western wind. Kivakka is the location of the greatest number of the sacred seita stones – the worship rocks of the ancient indigent Sami tribes.

Not far from the summit there is a huge rock reminding a woman’s head. Maybe it gave the name to the mountain because ‘kivakka’ in Sami means ‘a stone guardian’.

Little ponds formed in tectonic fissures on the mountain top. They are interesting objects of study for hydro biologists and ichthyologists.

Magnificent views open up from the summit over lake Pjaozero, Kivakkakoski rapids and Nuorunen fell, which is the highest peak in Karelia (576.7 m). On sunny days the mountain ridges on the Finnish side can be clearly observed.