The route is suitable for people of different age and physical condition. The exception is people for whom staying outdoors, long walks and excessive physical strain are not recommended for medical reasons. 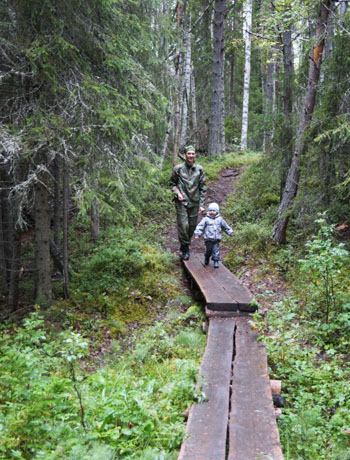 The trail starts from the former village Vartiolampi which before WWII was the closest to the state border. A wide vacant lot is left of the former village. Many grass species brought here by the farmers grow on the fertile fields and pastures. Only the pits are left of the houses’ cellars overgrown with raspberry bushes. A local graveyard was located in the southern end of the meadow in a spruce grove. Locations of the former houses in the village are marked with information placards. An old Karelian log house was reconstructed in the village with an exhibition devoted to life and habits of local dwellers of the beginning of 20th century.

From Vartiolampi the trail follows the old road. Wooden duckboards are placed in waterlogged sites. During the walk to the waterfall it is interesting to note the succession of the plant communities: the light birch wood at the beginning of the route is substituted by dark spruce forest and closer to the shore by pine forest. On the route one comes across anthills and rare plant species like the orchid Goodayera repens.

The trail goes along the bank of Olanga river, sometimes coming closer and then deviating again and you can notice how the temper of the river changes. Halfway on the route a splendid view over one of the rapids opens up. Two large millstones lie on the beach. Then the trail passes over rocky bank with huge stone blocks that are evidence of ancient earthquakes that happened at the age when the terrain of this area was just forming.

Kivakkakoski rapids is the most powerful unregulated waterfall in Karelia. Water falls from the height of 12 meters. It presents a magnificent view at any time of the year. A stone dam was built here at the turn of 20th century when timber was floated down the rapids.