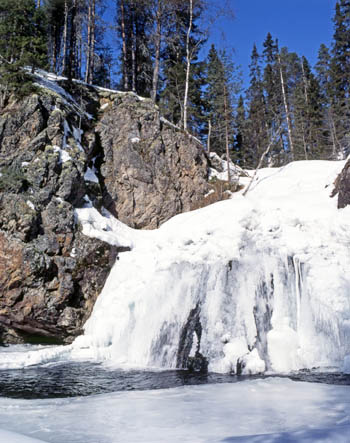 Oulanka – Paanajarvi area lies halfway between the Arctic and Atlantic. Wind from the East brings Siberian frosts. In winter the temperatures very often fall below -45◦C. The lowest temperature registered at Kuutakengas meteorological station in January 1985 was -48◦C. Warm western winds from the Atlantic bring moist air and abundant precipitations. Even in the middle of winter thaws can occur. The maximal summer temperature +32.1◦C was registered in Oulanka National Park in July 1972.

The first snow falls in the hills in September and in October the snow covers all the land. Thickness of snow by the spring time reaches 1.5-2 meters. On the hill slopes it can be 3 meters and more. In the first half of October ice covers the smaller lakes, by the end of October even the larger ones. Lake Paanajarvi is the last to freeze in December. River rapids freeze only in the severe frosts. In the first half of April the rapids shed the ice. At this time the first swans come back from the South. By mid-May Oulankajoki is completely free of ice. The water can rise up to four meters. The flood can last for two weeks. During the flood the torrents uproot whole trees and pile them up on the western shore of Paanajarvi lake. Lakes can stay frozen till end of May or even till 10 July after extremely cold winters.

The climate in the Oulanka-Paanajarvi region is fairly severe. The mean January temperature in the river valleys is about -15◦C whereas in July it does not reach +15◦C. The mean annual temperature is close to zero. The average annual precipitation measured in the course of many years is 550 mm. The territory is influenced by the warm Gulf Stream otherwise it would be much colder here.

Microclimatic conditions greatly vary throughout the area due to ruggedness of the terrain. It is slightly warmer in Oulankajoki valley. The south-facing slopes get more sun in the summer. Here you can find southern plan species. It is warmer in the deep valleys protected from wind than on the fells’ summits. It is always cool and moist in the deep crevices closed to the Sun. Therefore boreal plant species grow there. In winter it is noticeably colder in the valleys because the cold air descends there from the mountains.

The micro climate factor along with soil composition, structure of the bedrock and specific geomorphologic features is one of the predominant causes of exceptional nature diversity of this area. As everywhere in the Northern Europe the climate was not the same during the last 9,500 post-glacial years. While the large ice sheets still covered the land to the West the climate was relatively severe. Vegetation at that time was that of shrub tundra type. Then it became warmer and new plant species intensively colonized the region. Birch groves appeared. After a thousand years pine domineered in the forests. Warming of the climate went on for almost three thousand years and reached its maximum about 6,500 years ago. Supposedly the mean annual temperature at that time was 2-3 degrees higher than nowadays. Such favourable climate conditions lasted for about 1,500 years. Proliferation of vegetation caused overgrowing of lakes and formation of mires. Spruce started to expand to the West.

In river valleys spruce is dominating for 6,000 years. Obviously the exceptional biodiversity of the area formed during this period. The gradual cooling of the climate began. The share of deciduous trees in the forests diminished whereas the share of spruce still increased. Many plant species disappeared in the surrounding forest surviving only in the more friendly environments of Oulanka-Paanajarvi area spring-fed mires and on rock ledges. The last registered cold period lasted for 500 years and ended at the end of 19th century. The following 40 years was a relatively warm period. The boom harvests of rye and wheat were reaped in Paanajarvi area at that time.