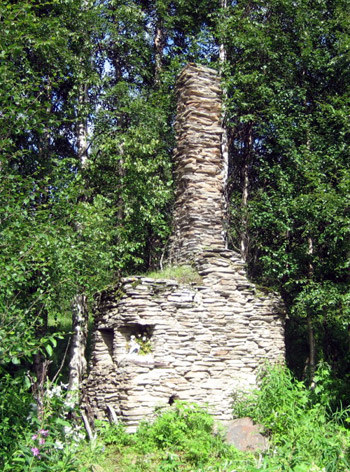 Long ago permanent settlements appeared on the steep northern shore of fjord-like lake Paanajarvi, sheltered by the high fells and warmed by the sun.

Favourable temperature conditions and fertile earth attracted there first Karels and from 1750s – mostly Finns. Abundance of fish in the lakes, fertile fields and vast forest lands rich in game were conducive for forming of an original farming community living in harmony with nature.

By the turn of the last century the shores of lake Paanajarvi were densely populated and human activity could not be restricted. Therefore this area was not included in the plans of establishing a protected nature territory together with the area of Oulankajoki river which later was incorporated in Oulanka National Park.

In 1926 professor K.Linkola prepared a plan of nature protection which after a couple of years became a basis for the draft law of the Government of Finland on establishing a National park. Its eastern boundary was supposed to pass to the west of Paanajarvi village.

Construction of the road from the south via Vuotunki to Paanajarvi was started in 1906. At first it was passable by horse carts only but in mid-20s it was substantially improved to a motor way which became a boost to local economic activities in the next decade. In the village of Paanajarvi there were four general stores, a bank branch and a medical station.

Redistribution of privately owned lands was carried out in 1930s after which according to revenue reports shareholders of Paanajarvi temporary land allotments represented 61 individual homesteads.

The second motor road was built to Paanajarvi from the north via Liikasenvaara in 1934 which opened a tourist route known later as Karhunkierros Trail – the Bear Trail. When the Winter War disrupted communication with the area this name passed over to a hiking trail in Oulanka National Park.

Paanajarvi village before the war was one of more prosperous in Kuusamo commune. It was also a known as a tourist destination. In summer 1939 more than one thousand tourists visited Paanajarvi. This area was often visited by nature scientists since it was the western border of the boreal taiga – a habitat of many plant species not to be found in other parts of Finland.

After the peace treaty of 1944 the new state border passed to the west of this territory and all traditional commercial relations with the rest of Finland were discontinued. The villages were burnt down in the course of the war and the territory remained abandoned for nearly half a century with border guards as the only residents.

Lake Paanajarvi although close became distant for Finland and inaccessible for Finns and Karels because of strictly guarded broad belt along the state border. Only in the end of 1980s this area caught the public attention again.

There were plans to construct a hydro accumulation project on lake Paanajarvi and a downhill ski resort on Nuorunen fell — the highest peak in Karelia. In no time Paanajarvi and Nuorunen have become the symbols of nature protection in Karelia. The condition and peculiar features of nature of the area of Paanajarvi were described in numerous publications on both sides of the state border and proposals for nature conservation made. It took a lot of effort to overcome the tremendous resistance on the part of logging companies and related businesses.

The confrontation finally ended for the benefit of ecologists in May 1992 with signing by the Government of the Russian Federation of the decree on establishing of Paanajarvi National Park. Its area is more than four times larger than that of Oulanka National Park. The boundaries of the Park practically coincide with the watershed area of Olanga river and lake Paanajarvi on the Russian side. Therefore the Park represents a compact nature protection area of exceptional value.